Well, we now have our breakdown of who is in which semi-final, we’re up to nine artists selected without a song, and five complete entries known! With more revealed just about every weekend, Eurovision season is in full swing! So, as we await the final song list and their final forms (due in mid-late March), let’s go over some hopes and dreams for this year’s Contest.

The theme for this year is “Come Together” and the logo is a IKEA style disco ball!

I can’t take credit for that joke, a friend in a Facebook-based fan club made it first. But still, the design leaves much to be desired. As we know from previous years, the design can often give us ideas of the final stage design. In 2013, Malmö gave us a backdrop based on the wing patterns of maths and butterflies. Denmark gave us boxes that mimicked the geometric design of their crystal emblem. And Vienna recreated the bridge from its logo as the upper bound of the stage. Having gotten my fan ticket for “Standing Right” I know that the stage will be a bit of a peninsula, surrounded by fans on three sides. I wonder if they will have a circular screen or if the stage itself will be round, allowing increased standing area for fans and exposure for those in the seats. What I hope for, more than anything, is that we will not get an overabundance of lame puns and dirty jokes based upon the slogan. A boy can dream, I guess. 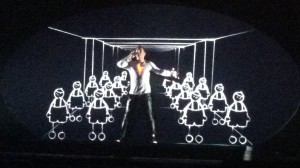 Måns Zelmerlöw will be our hosts for the Contest. While many love Mede, I think she is just okay. She is funny and capable, but I think she relies too heavily on gay jokes. As I have said before, ESC is for everyone, not just gay men. Sadly, I know it will be more of the same, especially since Zelmerlöw is trying to fight an image that he is homophobic (at one point in the past, he made a comment, while on a talk show that gets its guests drunk, that he thought allowing gay couple to adopt was not a good idea. He has since recanted this statement and has made many efforts to put it behind him). While I, myself, am a gay man and I know that a sizeable chunk of ESC fans in attendance are gay men, the majority of the audience is not. Pandering to the base is rarely, if ever, a good route to take. My hope from the hosts is that Petra Mede will not be wearing any of the hideous dresses she had on in 2013. Or, really, any hideous dresses in general.

As I said in my recap of 2015’s Contest, I loved almost every production decision made by the host broadcaster this past year; it’s the closest to a production that I, myself would have designed that we have seen. I would love to see Sweden carry on the tradition of highlighting the history of the Contest and tying the past, present, and future together. So many great songs have graced the stage of the ESC; it’s a shame that most fans today do not know anything older than 2010. Focusing on the history would be great – especially since Sweden is celebrating the 25th Anniversary of Carola’s win in 1991. The biggest thing I would like to see changed is the voting and interval act. A few years ago, a trend began where we had entertainment during the voting sequence as well as an interval act. I have no doubt that this has contributed to each of the past three Contests running way over time. My hope for the production is that we will go back to a tight 15 minutes for voting, where we get our two recaps and production clips. And that the interval act returns to being a succinct, yet entertaining, way for the host country to promote an artist/itself.

Last year, this was the biggest issue in the way how Vienna hosted the Contest.

My hope for the fan experience is that SVT builds upon the experiences of previous hosts and have an orderly, communicated plan of action for admitting those in the standing zone into the arena in a fair and safe way. Not only that, all security and ushering teams need to be in communication and on the same page with one another. Not only that, but SVT needs to communicate that ESC fans are on the same level of aggression and energy as any sports match or other major event. That, more than anything, seemed to be the issue in Vienna, the security was completely unprepared for the number and aggression of the ESC fans. The racial discrimination I and others faced was also a major problem, but there’s not much SVT can do about that other than diviersity training ahead of the event (which would be a great idea).

What are your hopes for this year’s Contest?

Like Eurovision Obsession? Help me go to Eurovision 2016! https://www.gofundme.com/andretoeurovision

This entry was posted on January 25, 2016 by ESC Obsession. It was filed under Eurovision 2016 - Stockholm, Personal Musings and Reflections and was tagged with austria, denmark, design, esc 2016, hopes for the contest, racism, sweden.